I’ve procrastinated writing about my summer in ‘Chi-town’ since my return from the states. The reason for this is twofold; firstly, because putting such an incredible experience into words is no easy feat and secondly, because writing this means writing in the past tense, hence the crushing consolidation of the fact that the experience has ended (cue the melancholic memories and small violins). Alas, I’ll solider on for the greater good of you folks reading this and wondering if Chicago is the place for you or if J1Accom should be your home for the summer. The answer to both is yes, don’t believe me? Read my story and I assure you, you will.

At twenty-two I felt that as college ended, I needed to do something to celebrate my survival. What better way than to the leave the country in search of dodgy tan lines, ‘Fourloco’ induced paralysis and the perfect pictures I’d seen friends post on social media platforms in previous years. Truth be told, Chicago hadn’t been on my ‘hit list’ of cities (poor choice of words- sorry Trump). That was until Paul planted the seed and within a few weeks, the flights were booked, the bags were packed and the legs were waxed (mine, not Paul’s). Cue a wonderful ‘Wow Air’ stopover with my friends (side note; pay the money and go with literally anyone else!) and it was only then that panic hit me; ‘would I like it?’ ‘What if our accommodation is overcrowded? My vision of the American dream stemmed predominantly from sitcoms and films and so, I expected the reality of American life to be true to this portrayal. When we touched down in O’Hare airport, my worries were quelled as the glorious grid of Chicago’s cityscape greeted us. Next problem, where in God’s name had we signed up to live?

No amount of research on the Illinois Institute of Technology (IIT) in the south of Chicago could possibly have prepared us for the building that our Uber driver delivered us to. Every inch of the SSV building screamed sleek, spacious and student-friendly. The biggest attraction being the layout of the individual two and three person apartments complete with single rooms, kitchen, living area and bathrooms along with twin sinks, ideal for slapping on makeup to cover sunburnt skin before jumping in an Uber to Joe’s. Being somewhat older than some J1ers, there was no way I would have survived the summer sleeping on a mattress with ten plus others- life is too short for that people! Impressed as we were with the apartments, the pies de résistance lay ahead as we reached the fifth floor; the sky deck- a spot soon to become our safe haven in a hectic city. Blinding sun, loungers dotted along the decking and in the distance -the skyline of Chicago; a concrete jungle waiting to be concurred. 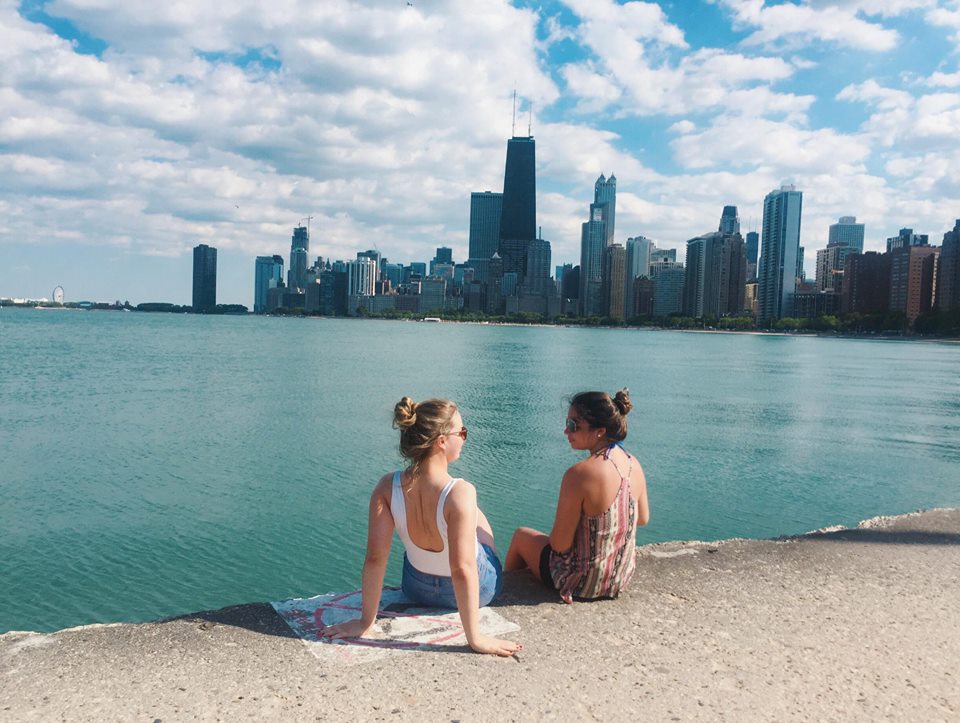 In the following days, we discovered that the buildings location was frequently serviced by CTA transport in the form of the red and green line ‘L’ trains and the CTA buses right outside the building bringing you to North Avenue beach which has great bar called Castaways and Navy Pier (go to both-thank me later). Aside from making the city centre readily accessible to us, it also saved us a fortune that would have been spent on Ubers to work and nights out.

While I wanted to explore and see Chicago, part of me always knew that I would experience some sort of homesickness and if you think that you’re immune to it my friends, then you’re mistaken. The best thing about J1 accom for me wasn’t the city of Chicago, the drunken nights, the days at the beach or the freedom of foreign travel, it was the group of people I would never have met if I hadn’t opted to stay with J1Accom. The group of people that came to be my J1 family. From day one, no matter who arrived in the building, instant and intense bonds were formed on the aforementioned sky deck, be it a person who opted to go solo for the summer or with friends. These people made Chicago my ‘home away from home’ in every way possible. From tough days at work, a need for home comforts or a hangover to sooth (7-eleven pizza does the job and it’s on campus) I was never short of someone to come to. At the head of our family were our ‘co-dads’-the CEO (Paul) and VP (Brian G). It was extremely evident from day one that J1Accom was more than just business for the Cork boys as any problems we had were readily resolved, personal or otherwise. We still meet up and reminisce over our carefree Chi-town days and that alone speaks volumes.

I could write all day about my experiences but what’s the point? Go see it for yourself, go have the summer of a lifetime, go and meet your own J1 family,

A Blessing in Disguise! by Emily Pike

Read More
We use cookies to personalise content and ads, to provide social media features and to analyse our traffic. We also share information about your use of our site with our social media, advertising and analytics partners who may combine it with other information you've provided to them or they've collected from your use of their services. To continue browsing on this site you will need to either opt in or out to our use of cookies by clicking 'Accept' or 'Don't Accept'AcceptDon't AcceptCookie Policy